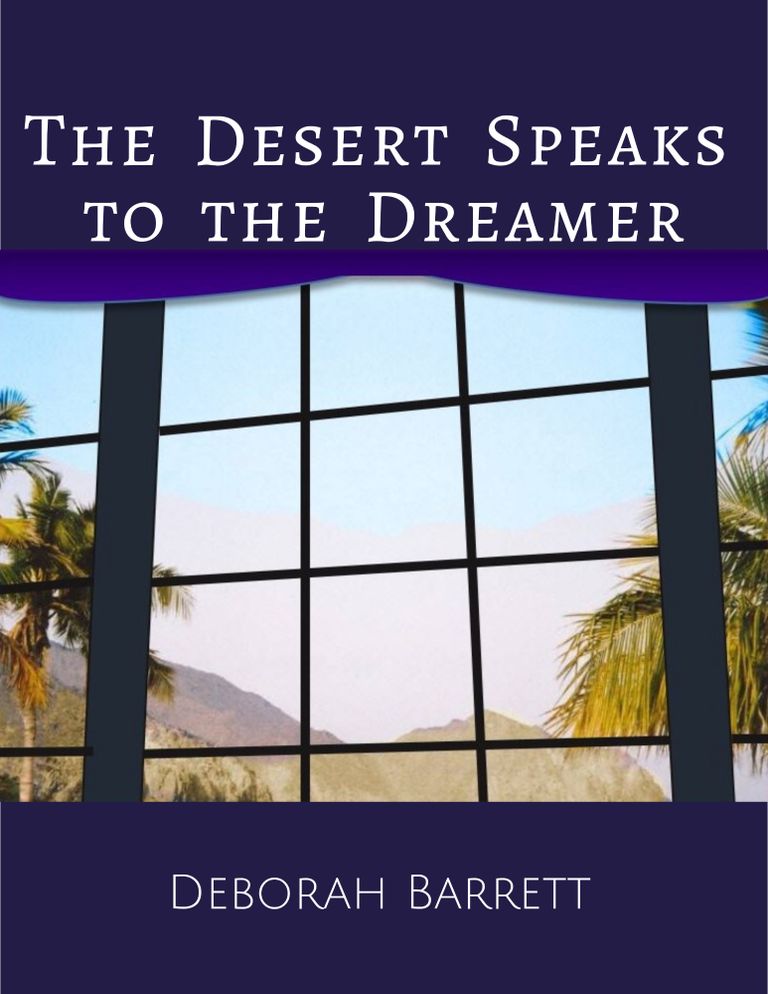 The Desert Speaks to the Dreamer

The rooster's crowing followed the Call to Prayer,

or was the crowing first, and then the call?

In her dove-white feathered bed, the dreamer

drowses while the two echo on top of each other

as if practiced every day to ensure perfect harmony:

One, the melodic sounds of a man, like an operatic aria

bringing the world alive to honor the Maker;

the other, sharp and urgent, like a jazz trumpet,

compelling all creatures to awaken.

Together their voices arouse the sleeper,

drawing her from unconsciousness,

lifting her from soft surrounding.

Her hands wipe the sand from her eyes.

Her tongue licks the brine from her lips.

Her feet recoil from the cold marble floor.

Pulled to the window to see the sun rising

over the desert, she leaves behind her dream

of an ocean rolling with diamond-capped waves

smashing against her body as she swims to shore.

From The Desert Speaks to the Dreamer

The Greens of Acadia

The green surrounds, carpets the trail we walk.

The sun streaks through the leaves’ tree-top abode.

The smells of pine and fir, sounds of soft talk,

to the dark of the avocado’s skin,

Then, deeper in, where sunlight cannot go

the other side of green emerges—decay,

spreading like veins through the body of their prey.

The Acadia forest, heaven of green,

nurtures life, death, the spiritual between. 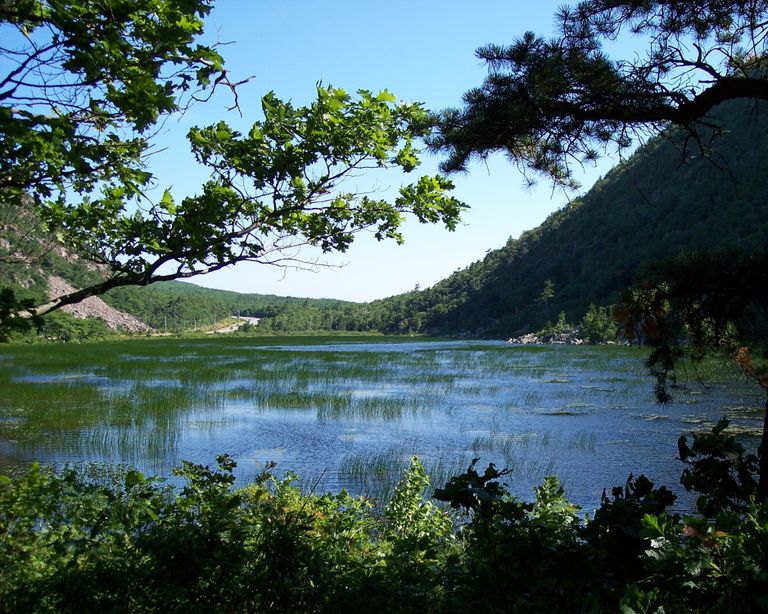 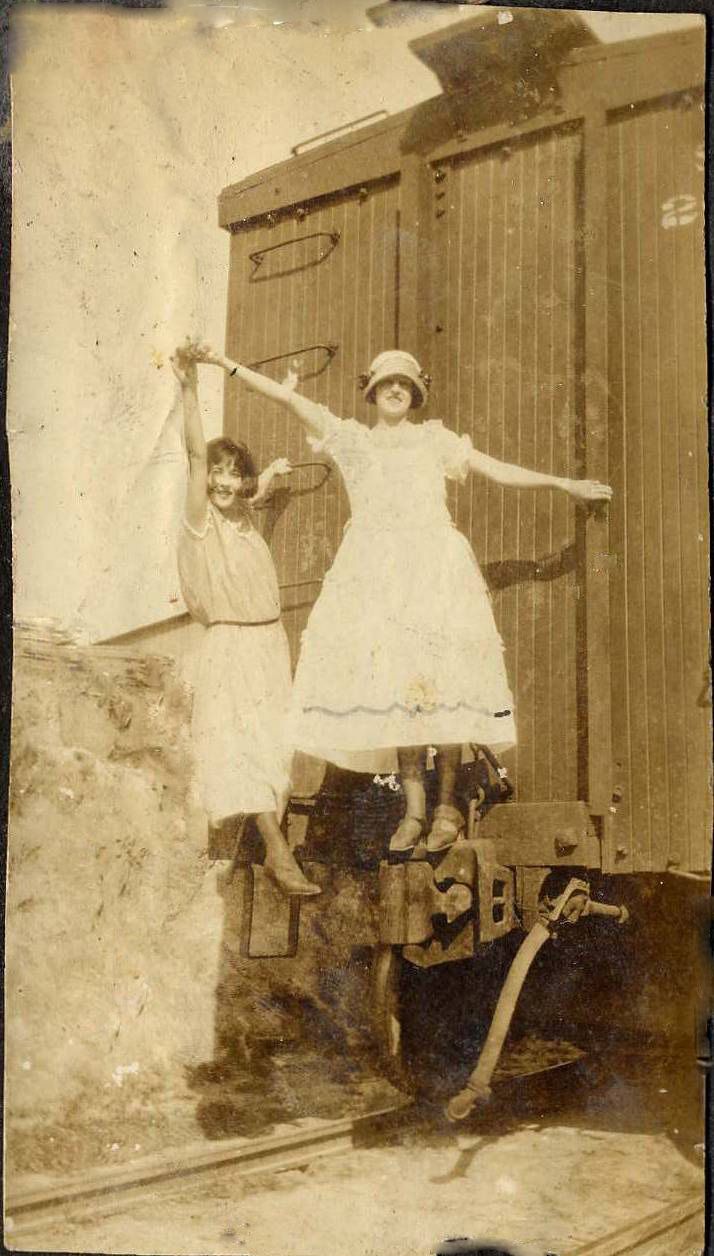 Poem Inspired by My Mother

To read more about her, see my web site (link below).
I launched this Website to share her story, starting with   the love letters she wrote to my father when she was the  1920's flapper pictured here.

In love letters to my father from her college dorm,

my mother professes to love only him, proposing

to him during leap year when custom allowed

women to make the first move.  She wrote,

soon afterward.  In the sepia photo I now hold,

I see that young woman before they married.

She hangs off a ladder on the back of a brown

from the car with one foot on a rung, the other

extended, pointing to the ground.  Her left hand

grasps the ladder, her right arm stretches out

to meet the hand of a friend standing with her.

My mother’s hair flies free, bobbed in a roaring

twenties cut.  Her stance creates the illusion of

flying with the train as it rumbles down the tracks.

But the train is not moving.  Dressed in such finery,

was she playing her role of the party girl all boys

wanted to court, hearing the tune she claimed they

sang for her, miss “five foot two, eyes of blue,”

while the train’s horn echoes in the background,

and the young woman fades into her future?

The Peacocks and the Sisters

The peacocks prance before deserted homes

across cleared lots determining their domain.

perfectly on the shimmering blue and green

gather in clusters in cul-de-sacs as if

waiting to be courted by flamboyant males.

to the mating ritual in the destroyed neighborhood.

Decades ago, a wealthy couple bought one

peacock and one peahen, envisioning the pair

as living decorations for their gated, garden

estate framed by the ancient pines and oaks

on the sloping banks of Buffalo Bayou.

Over the decades, the muster grew, and it

spread beyond the estate to nest on the grounds

and roost in the trees along the bayou.  Then, the

and pushed them to higher ground.

The bayou drowned many peafowls,

but some survived by clustering on roofs as the

people were rescued from water-filled homes.

Once the water receded, they appeared in abundance

to parade among the remains of the man-made world.

Across the wooden fence and four-lane street from

the community the peafowls are building is what

remains of the Cenacle Retreat of the Catholic Sisters.

prayer gardens, and labyrinth welcomed all.

But their peaceful surroundings were overtaken

by water when the Corp of Engineers opened the

gates to the reservoir dams during Hurricane Harvey.

The Sisters tried to save the Cenacle houses and gardens

but ended up having to be rescued themselves.

As people reclaim their neighborhood

and rebuild their homes, they chase the

peacocks away, forcing them to find

other homes to survive.  Perhaps they will

find respite in the remains of the Cenacle gardens.

Their Indian heritage and god Krishna

from Noah’s into a new world where the nuns’

prayers echo in the ghost trees of the peafowl. 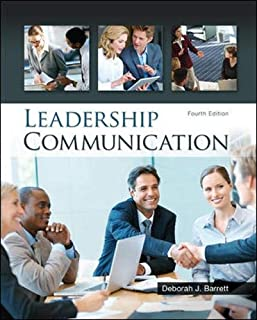